I’ve always wanted to visit Washington.  It’s just one of those cities you somehow know about – maybe because it’s the capital of the US or perhaps it’s because of the famous buildings and monuments that are often featured in movies and TV series, but there is something about it that just makes you want to spend time there.  So, when I got the opportunity to attend a conference in DC, I took full advantage and booked a nine day trip!

However, between conference sessions, networking events and a Friday afternoon deadline (the details of which I won’t bore you with) I really only had this past weekend, which was luckily a long one, to explore. 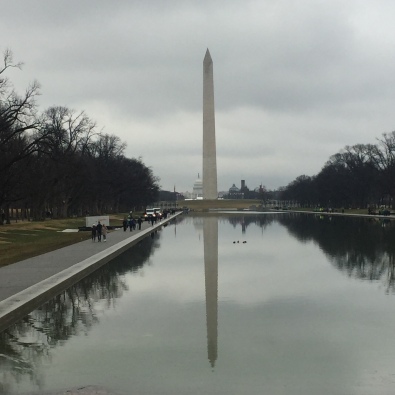 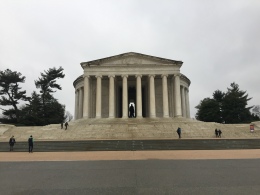 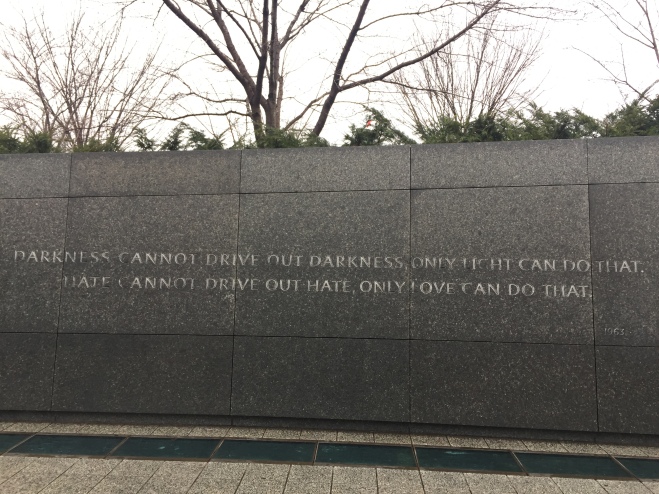 After allowing myself some time to sleep in on Saturday morning to recover from my crazy week and the drinks I had the night before, I donned my boots, jacket and gloves and headed to the National Mall, which is a national park in Washington along which many of the memorials, monuments and museums are situated.  I passed by The White House on my way to the National Mall but unfortunately I couldn’t get very close as fences and bleachers had already been erected in preparation for the inauguration this coming weekend.

I then headed to the far western end of the National Mall where I saw the Vietnam Veterans Memorial, Lincoln Memorial and Korean War Veterans Memorial.  I had planned to walk all the way along the National Mall to the US Capitol at the far eastern end but got a bit sidetracked when I learned of the Martin Luther King Jr. Memorial.  I thought it would be fitting to visit that with it being the anniversary of his birthday (and the reason for us having a long weekend in the US) so I headed south to the Tidal Basin.  I wasn’t overly impressed with the granite statue of King but the memorial also consisted of a 140m (450ft) long wall with 14 of his famous quotes about justice, democracy, hope and love etched into it and it was lovely to be reminded of his wise words.  There is also a Franklin D Roosevelt Memorial and Thomas Jefferson Memorial situated around the Tidal Basin and I wandered through both of those.

By this time it had started to rain so I quickly walked past the Bureau of Engraving and Printing (where all US paper currency is printed) and then popped my head into the Holocaust Memorial Museum as it was closing.  It is important to remember that with the exception of the American Art Museum and Portrait Gallery, which are open until 7, all other museums close at 5:30.  On my way back towards my little apartment in Foggy Bottom, I stopped past the Washington Monument and World War II Memorial and finally my very weary feet managed to get me to a bar, Tonic, where I had the most divine totchos (tater tots with all the toppings of nachos), a few glasses of wine and the most delicious boozy hot chocolate! 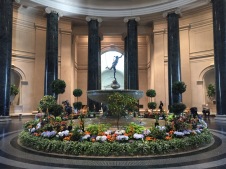 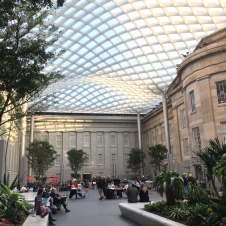 On Sunday morning, I woke up to bright sunny skies.  Not having made it to the Capitol the previous day that was first on my list of things to do.  If you’re heading to the Capitol, my advice would be to get off at the Eastern Market metro station and have a bite to eat in that area or even at the Eastern Market itself before heading to the Capitol.  Another advantage of approaching the Capitol from this side (the east) is that you’ll get to see both the Library of Congress and Supreme Court.  Unfortunately though the Capitol Visitors Center is closed on Sundays so I was unable to go inside and from the outside, it was less impressive than I expected especially with all of the fences, chairs, stages, draping etc. being set up for the upcoming inauguration.  I then stepped into the Botanical Gardens Conservatory which was quite lovely and the tropics offered a nice reprieve from the cold!

Thereafter, I made my way to the National Gallery of Art.  Not wanting to spend the whole of the sunny afternoon indoors, I decided to give myself two hours in the gallery and limited my visit to the collection highlights which ranged from a 15th century Leonardo da Vinci (the only one in the US) to a 19th century Turner.  The Gallery also has an East Building which houses the modern and contemporary art collection and has a rather disappointing roof terrace.  I did however managed to find some Matisse cut-outs on display as well as a couple of Picasso paintings and a sculpture which made the visit to the East Building worthwhile.

I emerged from the Gallery onto the streets to hordes of Washington Capitals fans leaving the Verizon Center and celebrating a win for the ice hockey team.  Wanting to escape the crowds, I decided to walk through the National Portrait Gallery and upon arriving at the Kogod Courtyard, I instantly regretted having had a bite to eat at the National Gallery of Art as I wanted an excuse to hang out in the beautiful space below the glass canopy a little longer.

However, with a full belly and the sun still out, I decided to head to Georgetown.  There is no metro to Georgetown but it was a quick bus ride from close to the Foggy Bottom GWU metro station.  I loved Georgetown – the streets where narrower than the large boulevards of downtown and much busier than the downtown area (except for the Capitals fans leaving the Verizon Center).  The streets were lined with small restaurants and shops that offered everything from cupcakes to wine and hats to designer jewelery.  I wandered down to the waterfront area, where the ice rink was still open, and watched the sun set over the Potomac River.  I then headed up Wisconsin Ave NW and along M Street NW to try and find the famous Georgetown Cupcake shop.  The line for Georgetown Cupcake was around the block so I opted for a Sprinkles Cupcakes instead which was also divine.  This also meant that I stumbled across the Old Stone House which is the oldest surviving example of Pre-Revolutionary Colonial architecture that still stands on its original foundation – right next door to Sprinkles Cupcakes.  After wandering around the quaint stone house, I headed to Eno, which is my favorite wine bar in San Francisco and which, to my delight, I discovered is also situated in Georgetown.

On my last day in Washington I headed to Dupont Circle and stopped by Le Pain Quotidien for a delicious breakfast.  After wandering around the area for a bit, I hopped on the metro and headed to Ford’s Theatre which is where President Lincoln was assassinated.  Tickets to get inside the theatre are free and I managed to grab one for the tour that was just about to start.  Unfortunately though I didn’t have much time to spend in the theatre and accompanying museum, as I had to catch my flight.

I am glad to have had the opportunity to see some of Washington and it certainly has a very stately feel with its wide tree-lined boulevards, statues in every square and famous monuments and museums around every corner.  But it lacked the atmosphere and vibe that I so love about big cities!  Maybe that’s because it’s actually not all that big (it only has a population of about 650,000) or maybe it’s the somber feeling about the upcoming inauguration or the cold weather.  But Washington didn’t steal my heart and if I ever do end up in Washington again for work, I’ll probably take the train to New York for the weekend!

3 thoughts on “Winter in Washington”